Explore the Ancient City of Polonnaruwa: A Cultural Treasure in Central Sri Lanka

Roam freely among UNESCO heritage ruins, temples and shrines. Read on for what to see in Polonnaruwa! 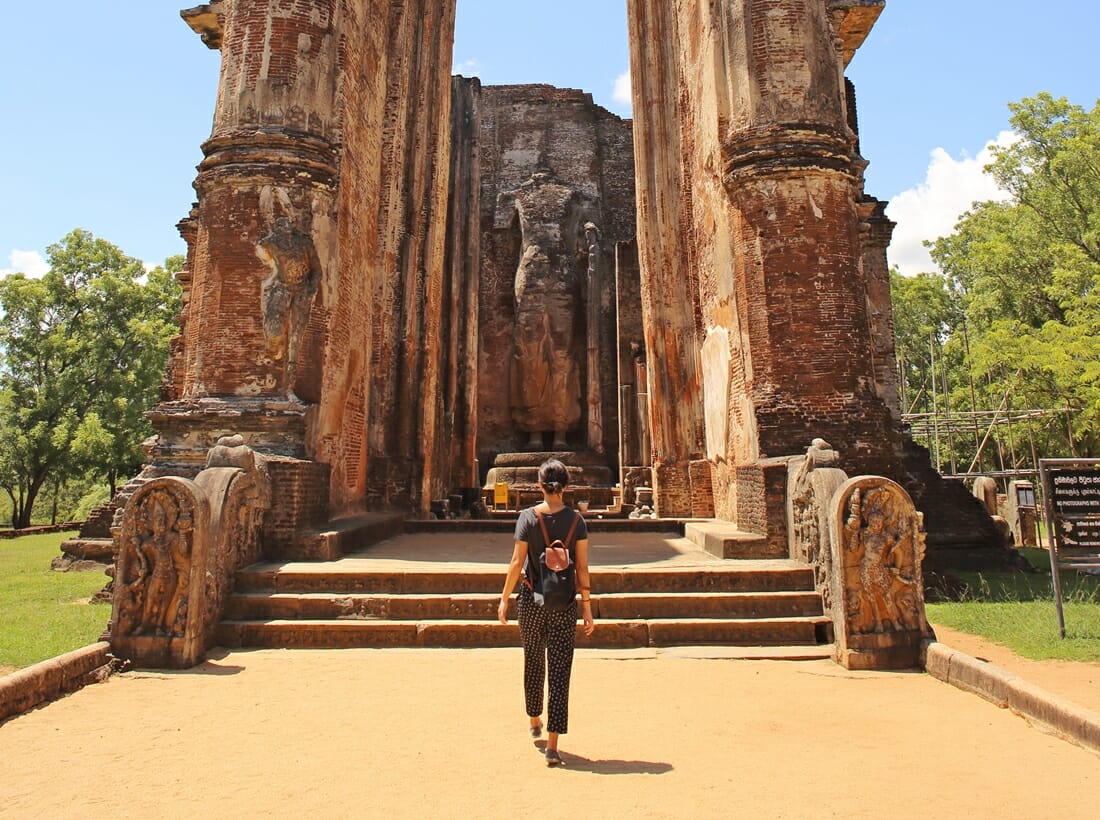 Polonnaruwa is an ancient city in Sri Lanka and forms part of the “Cultural Triangle” along with Sigiriya, Anuradhapura, Kandy and Dambulla. It served as the capital city for nearly 2 centuries between the 11th and 13th centuries AD and is an incredible day trip destination in Sri Lanka. During its time as a capital, Polonnaruwa was ruled by the Kings Vijayabahu I, Parakramabahu the Great and Nissanka Malla – all 3 of these rulers devoted themselves to fostering agriculture, religion and social development and the kingdom prospered under their reign during this era.

Much like the ancient city of Angkor in Cambodia, being able to walk relatively freely through the ruins, temples and shrines is an incredible way to take in the history of the country and imagine what it must have been like in its heyday. The ruins of Polonnaruwa were officially inscribed as a UNESCO World Heritage site in 1982.

If you are planning a visit to Sigiriya Rock Fortress, then you must venture over to Polonnaruwa to explore the ancient ruins. Wondering what to know before visiting Polonnaruwa in Sri Lanka? Read on for important visiting tips and the top things to see in the ancient city of Polonnaruwa!

How to get to Polonnaruwa

To get to Polonnaruwa I would recommend that you base yourself in Sigiriya: this way, you can climb the giant rock fortress, visit the Dambulla Cave Temple and go on a safari in Minneriya or Kaudulla National Parks. Sigiriya is a 3-hour drive away from Colombo, and Polonnaruwa is only an hour away from Sigiriya by car.

How to get around Polonnaruwa

It gets really, really hot in this part of Sri Lanka, so I would not recommend walking if you want to cover the top places to visit in Polonnaruwa. The best way to see the ancient city, especially if you only have 1 day to see it all, is by (air conditioned) car. If you are on a budget, you can rent bicycles to get from site to site. Google Maps is fairly accurate when it comes to the individual sights, or you can grab a map from the ticket office.

How much time to spend at Polonnaruwa

The ancient city of Polonnaruwa comprised a citadel (inner city) and an outer city. The citadel had 2 types of buildings – the king’s palace/royal court as well as administration buildings. The outer city contains religious shrines, with the main shrine being the Sacred Quadrangle.

The monuments within the ancient city are concentrated in one area, and it is fairly easy to see the main sights within 1 day, especially if you have a car. The main sights are scattered along a one-way road. We arrived at the ticket office at approximately 10 am and were done by 3 pm. The site opens from 9 am to 6 pm every day.

There aren’t any restaurants within the complex so I would recommend eating a hearty breakfast and bringing a light snack or water with you.

An adult ticket costs 25 USD or 3850 LKR, and tickets for children cost exactly half of that.

What to wear when visiting Polonnaruwa

Polonnaruwa contains religious shrines and monuments, so it’s important to dress appropriately. Shoulders and knees should be covered (men and women), and you will have to take your shoes off to enter the shrines so bring shoes that are easy to slip on and off. Because of the weather in the area, the ground gets steaming hot, so bring some socks along so you don’t burn your feet.

It should also be noted that taking photos with your back facing the Buddha images or statues are prohibited at all of the monuments.

Incredible places to visit in Polonnaruwa

Wondering what to see in Polonnaruwa in Sri Lanka? There are an incredible number of historical monuments all situated close to one another. This is the order in which I would recommend you visiting them in to make the most of your time in the ancient city. I’ve listed the monuments as they are named on the official map from the Central Cultural Fund, but if you are using Google Maps some monuments may be spelled slightly differently: for example, Rankot Vehera is “Rankoth Vihara” on Google Maps – but don’t worry, they’re the same place.

Here is a Google Map of the different monuments, or you can click here for a photo of the official Polonnaruwa map from the Central Cultural Fund. Read on for places to visit in Polonnaruwa that you can’t miss!

Start at the Archaeological Museum/Ticket Office

Before you enter the archaeological site you will need to purchase your ticket from the ticket office. In the same building you will also find the Archaeological Museum where you can learn about the history and excavation of Polonnaruwa. While you’re here, use the bathroom as they’re not that easy to find within the complex itself.

Outside the ticket office there are many guides that you can hire if you’d like someone to show you around the ancient city and talk you through the history, but when we were approached by the guides they were all extremely pushy, so we decided against it and read up on the history ourselves instead.

Believed to once have been a very large building (seven-storeys high), only the foundations remain of the Royal Palace. The red brick walls of the palace are still standing and when you walk in you see what is thought to be the audience hall.

In its prime it is thought to have comprise queen chambers, official quarters, parks and baths. The Kumara Pokuna is an example of a royal bath made entirely of stone.

Due to the Chola invasion there is a high influence of the Hindu culture and religion within Polonnaruwa. At least 14 Hindu shrines have been found, including Siva Devale No. 1 and No. 2. Both were built according to South Indian architectural traditions using stone around the 13th century and are shrines to the Hindu god Shiva.

Siva Devale #1 and #2 are located in separate parts of the city.

The Sacred Quadrangle is a group of monuments including the Vatadage (AKA Watadage), Hatadage, Sathmahal Prasada, Nishshanka Latha Mandapaya, Gal Potha and more. The Vatadage is thought to be where the Sacred Tooth Relic of the Buddha was enshrined, and is surrounded by four well preserved seated Buddha statues.

At the entrance you will see a perfect moonstone that depicts the Polonnaruwa era. The Hatadage is named as it is thought to have been built within 60 days – once you walk through the main gates you will find standing statues of Buddha.

Next to the Hatadage is a stone slab known as Gal Potha: it measures about 8 metres in length and 1.2 metres in width and shows incriptions describing the work of King Nissankamalla. Learn more here.

Rankot Vehara is a massive brown-coloured stupa and follows the architectural style of the city of Anuradhapura. There is a stone pathway that leads to the stupa and gateways that open at the cardinal points. It is 1 of 2 main stupas within the Polonnaruwa complex.

To enter Gal-vihara you need to produce your ticket again, so make sure you haven’t misplaced it.

This rock shrine consists of a group of rock sculptures showing Buddha seated, standing and lying down.

The standing Buddha statue is especially rare as it shows Buddha’s arms across the chest which is not seen often.

Venture a little further north and you’ll find the lotus pond, named that way after its unique shape. It was once used by monks for bathing and its tiers provided seating for them.

Where to stay if you’re visiting Polonnaruwa

Check out EKHO Sigiriya (formerly named Zinc Journey Sigiriya) – it offers beautifully decorated rooms, incredible service and is right next to Sigiriya Rock. The rooms are spacious and some even open up to the front garden – you can even see the rock from the hotel! I wish we had stayed here on our first trip to Sigiriya. The hotel staff can also arrange safaris to Minneriya and Kaudulla National Parks to spot wild elephants.

Click here to book your stay at EKHO Sigiriya! Want to stay overnight in Polonnaruwa and looking for more choices? Click here for more accommodation options around Polonnaruwa!

Another option for nature lovers is Diyabubula, a 5 bedroom eco-luxury jungle hideaway that was built with sustainability at the forefront. Diyabubula is the perfect retreat if you want to be immersed in nature – it is shaded by dense canopy and is filled with the sounds of birds chirping, butterflies fluttering and monkeys jumping from tree to tree. Read my full hotel review here, or check out the various room types (bamboo grove, water villa, tree house) at their website!

I’m often asked whether it’s worth visiting both Polonnaruwa and Anuradhapura. From a logistics standpoint, Polonnaruwa is in a more convenient location as you can also visit Sigiriya, the Dambulla Caves and Minneriya or Kaudulla National Parks, while Anuradhapura is located a little out of the way. The landmarks and sites in Polonnaruwa are also located more closely together, which makes them easier to visit; in contrast, Anuradhapura is a sprawling ancient city and it requires more effort and time to get around.

That being said, there is a certain electricity in the air at Anuradhapura that you might not find in Polonnaruwa. There are thousands of Buddhist devotees who worship at the various temples in Anuradhapura, and it offers a glimpse into the significance and importance of Buddhism in Sri Lanka. If you have more than 2 weeks in Sri Lanka, you might want to check out both of these ancient cities; however, if you are short on time and only have 1 week in Sri Lanka then I would recommend sticking to Polonnaruwa.

The ruins of Polonnaruwa are in excellent condition, and the Sri Lankan government’s Central Cultural Fund has done a wonderful job of preserving the architecture and heritage. In my opinion it is just as incredible as Sigiriya, and is a must-visit destination if you are spending time in Sri Lanka’s Central Province. Have you visited Polonnaruwa? What did you think of the ancient city?

Planning a trip to Sri Lanka? You might also enjoy these reads:

Visit Orvieto in Italy: The Perfect Day Trip If You Want to Avoid Rome’s Tourist Crowds

Visit Orvieto in Italy: The Perfect Day Trip If You Want to Avoid Rome's Tourist Crowds