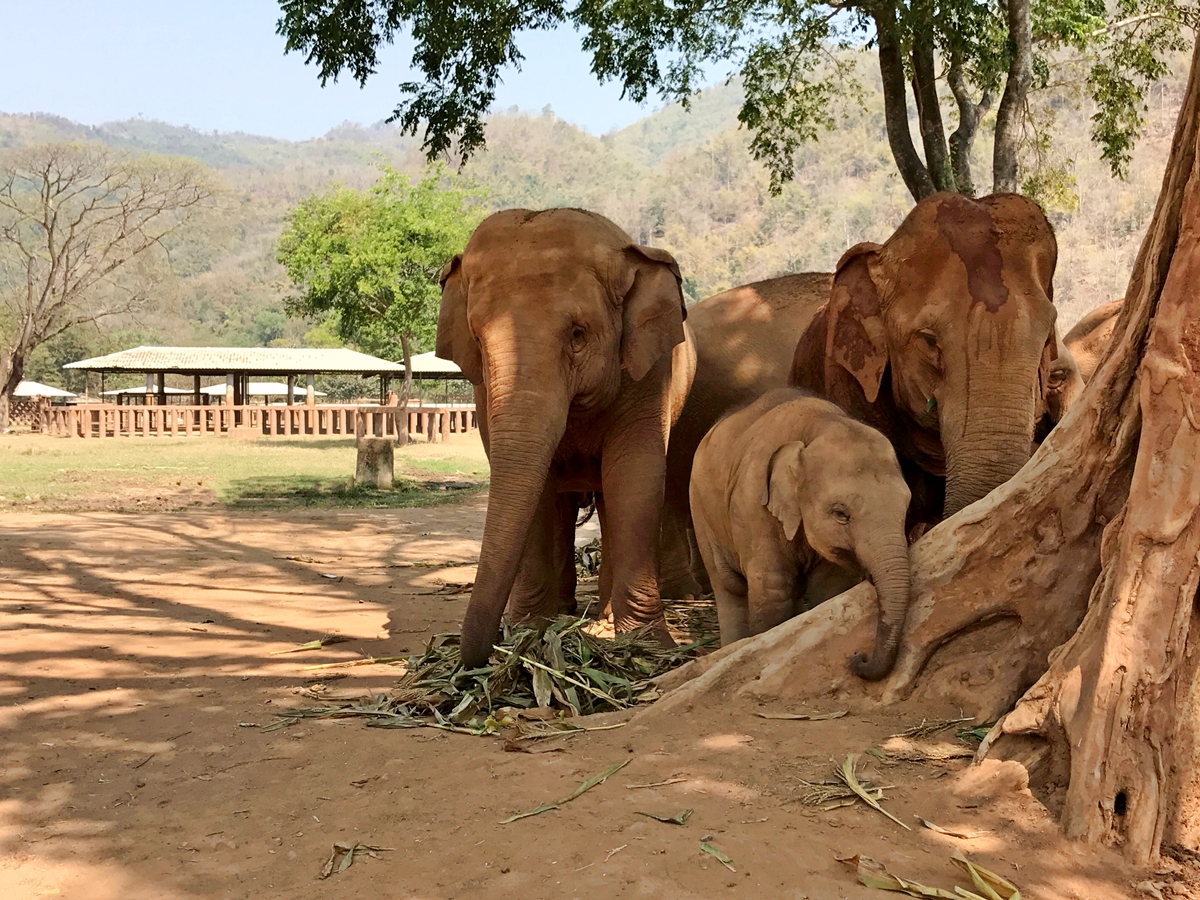 Growing up, I loved all kinds of animals, but I’ve always felt especially drawn to these gentle giants. They are intelligent and social, soft but protective, statuesque yet unostentatious. After I graduated from college (bear in mind this was almost a decade ago!), my friends and I went on a trip to Phuket for some R&R, and somehow found ourselves at one of the “cultural theme parks” there. The theme park has one of the largest shows in Asia with trapeze artists, pyrotechnics, and of course – performing animals.

The minute we sat down I could feel my heart sink. What had we gotten ourselves into? As soon as I saw the elephant trainers force them to stand on their two front legs it hit me and I just couldn’t stomach what was to come: I had to get the hell out. To this day, I still deeply regret patronizing that establishment and won’t share a stock photo because I can’t even stand to look at one.

But look – I am not here to lecture or preach.

Without sounding too cliché, the more you know the better equipped you are to make a sound decision, one that’s right for you and your family. There are so many wonderful places around the world where you can support and nurture the growth and survival of elephants, and I would encourage you to look into all the different elephant experience options. I will say this though, I have since visited the Yala, Udawalawe and Kaudulla National Parks in Sri Lanka and witnessing elephants in their natural habitat is pretty darn incredible.

I also finally visited Elephant Nature Park in Chiang Mai, a rescue and rehabilitation centre, and absolutely loved the opportunity to spend some quality time with the rescued elephants.

So, what are elephant sanctuaries and what do they do?

In general, an elephant “sanctuary” (or “park”, “camp”, “orphanage”) is a home for elephants that have been rescued or retired from the riding, logging, street begging and/or circus industries (just to name a few). It provides medical attention, food, water and space for them to live out their lives; however, given the lack of availability of natural habitat, elephant ownership or ongoing medical issues these elephants live in captivity and may not be returned to their natural habitat. Some, like the Elephant Transit Home in Sri Lanka, return the elephants to the wild to re-integrate with herds in national parks.

Many facilities that call themselves a sanctuary, park, camp or orphanage are open to visitors who can interact with these elephants for a price – the fee goes towards food, bills, salaries and so on so that the facility can continue to operate. However, if you are researching elephant experience places to interact with or observe animals, there are a few factors that you should bear in mind. According to the World Animal Protection organization, “If you can climb, ride, hug, hold or touch an elephant, chances are the elephant has been subjected to cruelty and is living in poor conditions.”

From the WAP’s Research Report on the conditions for elephants used in tourism in Asia: “A true elephant-friendly venue is purely observational for visitors, where the safety of visitors and wellbeing of elephants is not affected by the need to constantly control the animals. The elephants would be managed in humane ways through the mahout who allows a maximum of freedom or through advanced ‘protected contact’ techniques.”

Love and want to contribute to the well-being and conservation of elephants? Here are a number of ethical elephant sanctuaries, orphanages and national parks around the world that you should visit ASAP where you can observe elephants in a protected setting as well as in the wild.

There are some great articles that I’ve linked to below from travel bloggers who have taken the time to share their experiences at some of these places, and the World Elephant Day website is another fantastic resource for information on foundations, trusts and projects dedicated to elephant conservation, protection, research and education! A big thank you to the Instagrammers and travel writers below who were kind enough to let me share their photos! I encourage you to take a look at the rest of their Instagram feeds for more beautiful pictures.

The Sheldrick Wildlife Trust operates one of the most successful orphan elephant rescue and rehabilitation programs in the world, and is one of the oldest wildlife charities and a leading conservation organization. Their elephant orphanage in Nairobi National Park is open the public and you can visit to observe the orphans enjoying a milk feed and mud bath.

Yala National Park is the most visited and second largest national park in Sri Lanka. It is located in the south of Sri Lanka and is a popular destination for those hoping to spot a spotted leopard as it boasts one of the highest leopard densities in the world. It also happens to be home to many elephants and other wildlife who roam freely within the park’s confines. Read more about Yala National Park and what you need to know before you visit here.

Amboseli National Park is one of Kenya’s most popular parks and home to the “Big Five”. The name “Amboseli” comes from a Maasai word meaning “salty dust”, and it is one of the best places in Africa to view large herds of elephants. Read more about visiting Amboseli here.

Elephant Jungle Sanctuary is one of the older and more established elephant parks in Chiang Mai in Northern Thailand. Founded in July 2014, it is a joint initiative between members of the Karen hill-tribes and Chiang Mai residents who were concerned about the welfare of elephants in Thailand. Read more about visiting the Elephant Jungle Sanctuary here.

Tarangire National Park in Tanzania is the 6th largest park in Tanzania and is best known for baobab trees and massive herds of elephants. Though you can go on a wildlife safari in Tarangire all year round, June to September is best if you are hoping to view a large number of animals.

Visiting Chiang Mai? Click here for 10 things to do in Chiang Mai that don’t involve riding elephants or petting tigers!

Nairobi National Park may be a small national park, but is home to the endangered black rhino, lions, leopards, cheetahs, elephants, hyenas, buffaloes, giraffes and over 400 species of birds. Due to its proximity to the city it is one of the only national parks where you can see buildings and skyscrapers in the backdrop.

A photo posted by KindredSpiritElephantSanctuary (@kindredspiritelephantsanctuary) on Jun 30, 2016 at 4:41pm PDT

Chiang Mai in northern Thailand is home to dozens of elephant camps, sanctuaries and orphanages. But the dirty little secret is that few of these establishments put the welfare of elephants first; instead, too many of these places offer elephant shows and riding. The Kindred Spirit Elephant Sanctuary is located in a remote village, about a five hour drive from Chiang Mai, and was co-founded by a passionate zoology graduate from Ireland and a Thai mahout who grew up with elephants in the Karen hill tribe village where they operate. Read more about the sanctuary and homestay experience here.

Kruger National Park is one of the largest game reserves in Africa spanning 19,633 square kilometres. It is home to the Big Five and is one of South Africa’s most popular safari destinations for wildlife lovers.

Udawalawe National Park is located in the south of Sri Lanka and is a popular destination for those hoping to spot wild elephants. It is quite possibly the best place in Sri Lanka to see wild elephants throughout the year as there are a few hundred elephants within the park, and you can sometimes witness a herd of females moving or bathing together in the wild.

Sri Lanka’s biodiversity is one of the highest in the world. Click here for everything you need to know to plan your trip to Sri Lanka!

Nagarahole Tiger Reserve in Karnataka State in southern India was named after the river “Nagarahole” which literally means “Serpent River” in Kannada. The reserve, though best known for its population of wild Asian tigers, is also a habitat for elephants, leopards, deer and many other animal species.

Did you know that you can visit Nagarhole National Park from Mysore? Click here for my guide to visiting Mysore to practice Yoga!

The Elephant Transit Home in Udawalawe is an orphanage for elephant calves. Unlike many other so-called “orphanages”, however, human interaction is kept to a minimum to maximize the chances of the elephants’ survival once they are returned to the wild and re-integrated with wild herds.

These two parks host what is known as “The Gathering”. Once a year, the Asian elephants of Minneriya and Kaudulla National Parks congregate during the dry season near manmade tanks to drink, play and bathe. The two parks, though separate, are next to each other and divided by the “elephant corridor” jungle that stands between them. It is one of the best places to see dozens, sometimes hundreds, of wild elephants in Sri Lanka.

MandaLao is an ethical elephant sanctuary in Luang Prabang that opened its doors in November 2016, and is currently home to approximately one dozen rescued elephants. The 500-acre property is located about 30 minutes away from Luang Prabang’s Old Town, and is an ideal home for its elephants to roam free – unchained. No bull hooks, no riding, no chaining. Read more about visiting MandaLao here.

Have you visited an elephant sanctuary, orphanage or wildlife park that you loved? Please share your experience with me in the comments section! 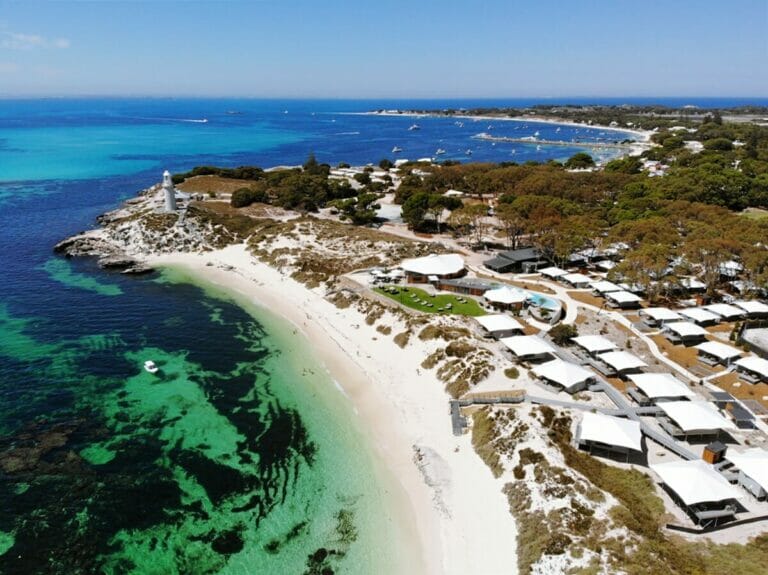 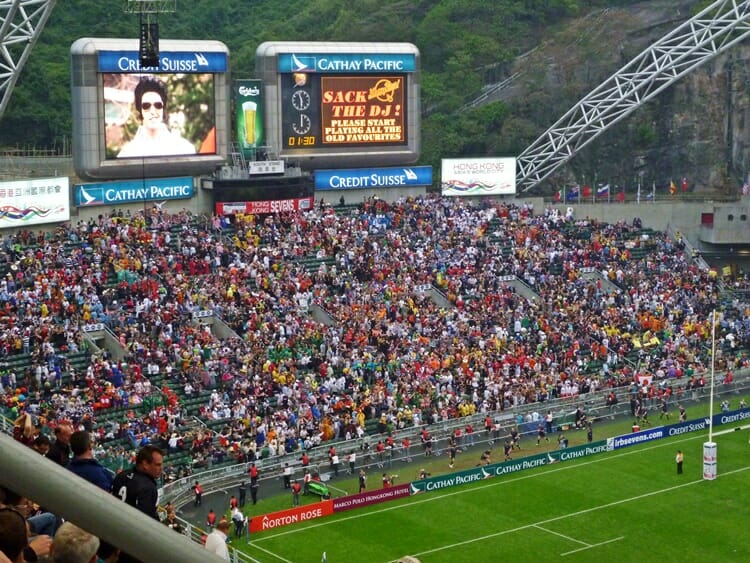 The Hong Kong Sevens (AKA Cathay Pacific/HSBC Hong Kong Sevens) is one of the most popular sporting events in Asia, attracting some of the world’s greatest rugby players and tens of thousands of people who gather to watch fast-paced sevens matches. The Hong Kong 7s has been around since the mid-1970s and is one of… 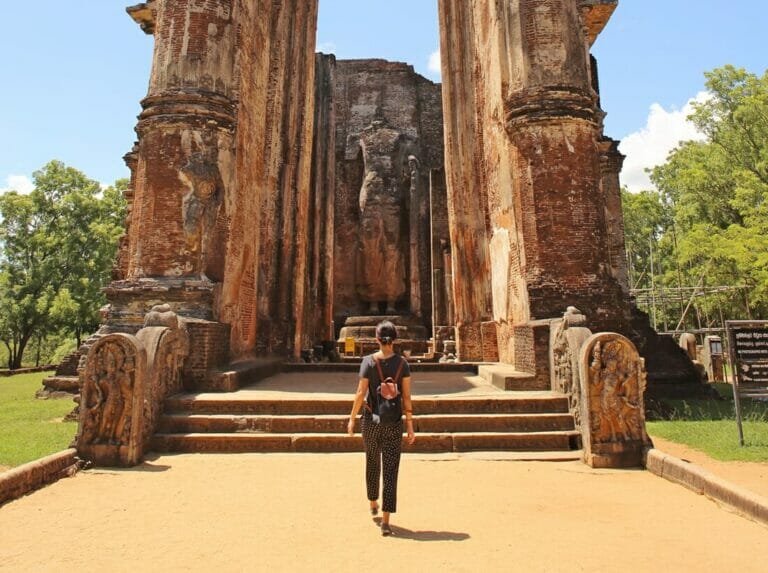 Roam freely among UNESCO heritage ruins, temples and shrines. Read on for what to see in Polonnaruwa! Polonnaruwa is an ancient city in Sri Lanka and forms part of the “Cultural Triangle” along with Sigiriya, Anuradhapura, Kandy and Dambulla. It served as the capital city for nearly 2 centuries between the 11th and 13th centuries AD… 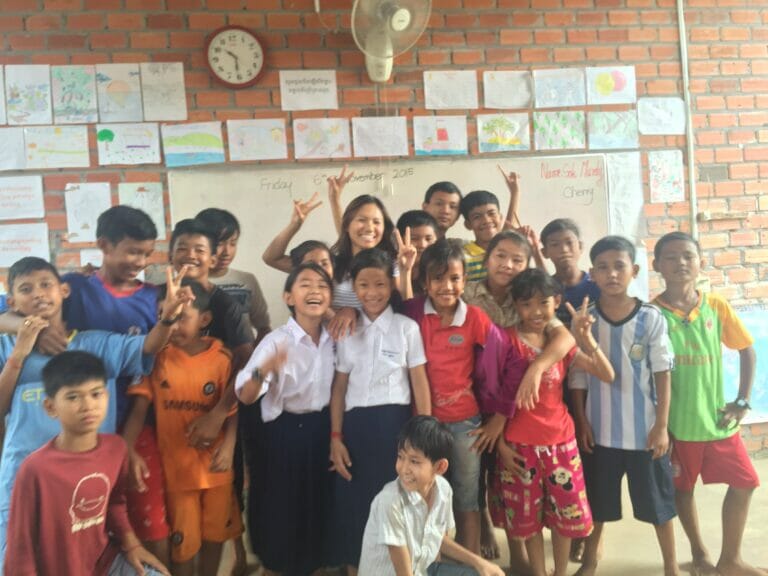 “We make a living by what we get, but we make a life by what we give” – Winston Churchill So you might be thinking to yourself, “I want to volunteer abroad, where do I start? Where can I volunteer?” With a wealth of different program options around the world, there are some important factors to consider… 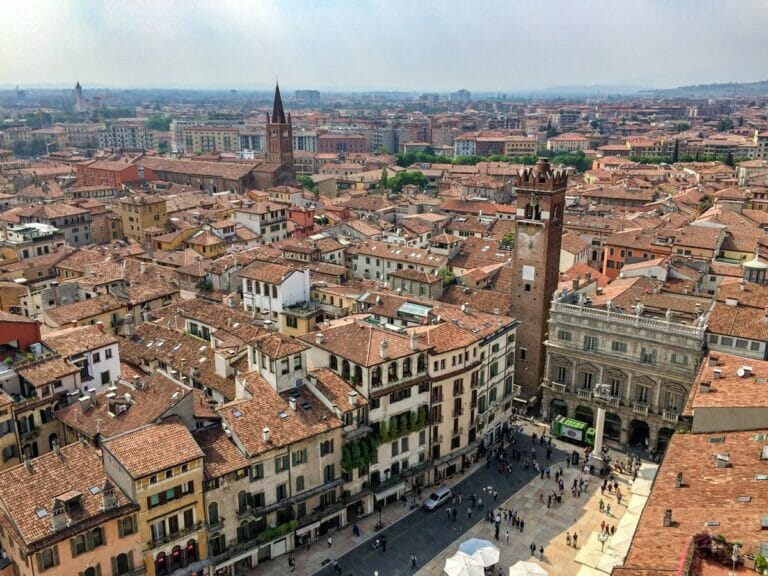 Because there’s more to Verona than Romeo and Juliet! Read on for what to do on your day trip from Venice to Verona. I’m not known for being an extremely sentimental person, there’s even a running joke about how I received a wonderful, lengthy handwritten Christmas card from my boyfriend last year – in return, I… 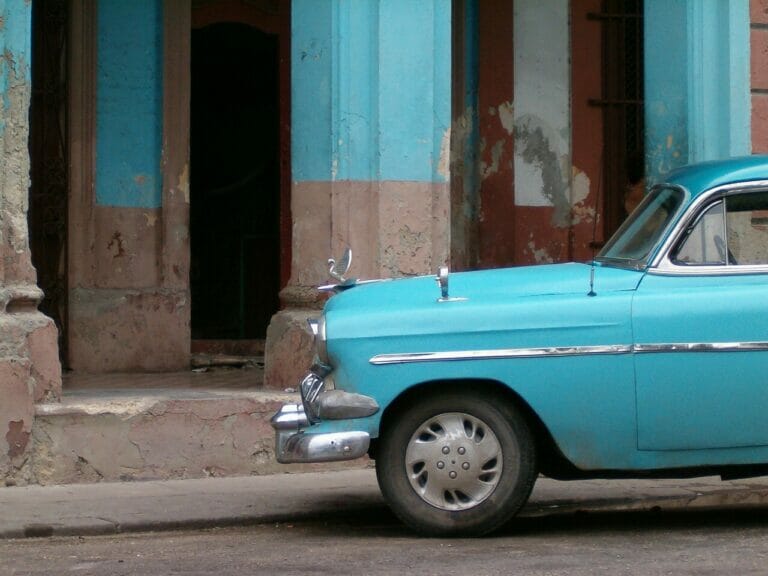 Oh, Havana nights! It’s too bad it reminds me of one of the all time worst movies ever made, but what I wouldn’t do to walk through the old streets of Havana, take in all the rich culture and sip on mojito after mojito. This is going to happen…one day, hopefully before a McDonald’s opens…