Wondering what NOT to do in Sri Lanka? Read on for things you should avoid doing if you're planning a trip there! 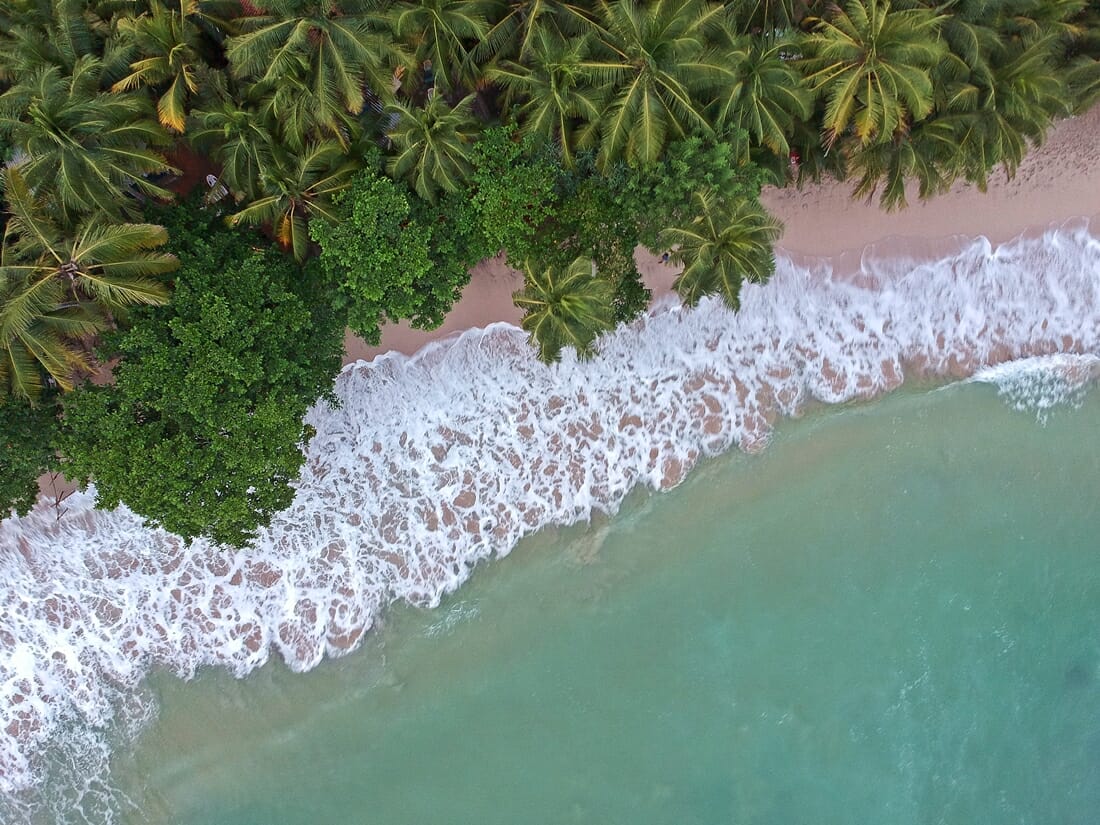 I’ve written plenty of guides on why you need to visit Sri Lanka now, how to plan your trip, what to see, where to go, and what you should know before you visit. Unless you’ve been living under a rock, you’ll know that Sri Lanka has become one of the top places to visit in Asia. Since I’ve written extensively about what you should do in Sri Lanka, I thought it would be fitting to cover some things you shouldn’t do in Sri Lanka!

Are you visiting Sri Lanka for the first time? As with any travel destination, there are some important do’s and don’ts when you travel around Sri Lanka – read on for everything you need to know about what to avoid doing if you’re traveling to the Pearl of the Indian Ocean.

Let me start with the good news: Sri Lanka has more than a dozen or so national parks where an estimated five to six thousand elephants roam freely. However, there are also approximately 120 to 200 elephants in captivity (according to the World Animal Protection Organization) and they are mostly used in religious processions as well as riding camps.

Elephants are “broken” to train them to allow riders on their backs using a variety of cruel methods, and many are not fed properly as well as kept in chains. You’re likely to find elephant riding camps in and around Sigiriya in central Sri Lanka.

Be a responsible traveler and head to one of Sri Lanka’s many national parks to see wild Asian elephants instead! Alternatively, you can also visit the Elephant Transit Home in Udawalawe to see orphaned baby elephants – these elephants are returned to the wild after they turn 5 years old.

Things can get seriously dicey in some of the more popular national parks. I once saw an elephant put its tusks through the open side of a safari jeep in Yala National Park because the driver got too close – thankfully, nobody was hurt but the elephant did throw a woman’s purse out of the jeep and stomped on it.

Respect the animals by keeping a safe distance, and don’t encourage your driver to get too close or to chase wild animals. Some irresponsible drivers may equate a better line of sight with more tips – assure them that that is not the case.

Wondering what else there is to do along Sri Lanka’s southern coast? Head on over here!

3. Don’t touch any dogs that don’t have their ears clipped or don’t have a collar

Unfortunately, rabies does still exist in Sri Lanka, though there are amazing charities like WeCare who run vaccination as well as spay/neuter programs around the island. Just last year, a young French boy was nipped by a puppy in Sri Lanka and tragically passed away once the symptoms set in when he returned to France.

4. Don’t ride a scooter or motorcycle without a helmet

Though scooter rentals are not as big in Sri Lanka as they are in places like Bali and Thailand, you might still be able to rent scooters here and there, especially along the southern coast. Just know this – you will get stopped by the police if you ride a scooter or motorcycle in Sri Lanka without a helmet, and you will be fined. Plus, don’t you want to protect your noggin in case you get into an accident?

5. Don’t cross the road without looking both ways

Another traffic related one! Bus, truck and tuk tuk drivers in Sri Lanka often drive like madmen. Just because you are in a small town or village doesn’t mean that you should let your guard down. Use designated cross walks if there’s a lot of oncoming traffic, and be vigilant during dusk and at night – there are lots of blind corners!

Though Sri Lanka and India are separated only by a narrow channel of water, the two countries are so, so, so different! The people speak (very) different languages, the culture and customs are unique, even the food is extremely dissimilar.

7. Don’t visit a turtle facility unless you’re 100% sure that it places the welfare of turtles and eggs above tourist demands and photo opps

Phew – that was a mouthful! Look, I’m pro-turtle conservation (obviously), but the standards of care for wild turtles are not yet well regulated in Sri Lanka, and many places try to pass as a legitimate ethical facility just by sticking the word, “sanctuary”, in their name. This is definitely one of those things to avoid in Sri Lanka. Do your due diligence before you support one of these places, and read reviews from other tourists before you go.

The good news is, many places along the coast put up cages to keep the eggs safe until they hatch, and you often don’t need to pay a fee to go see them as all beaches in Sri Lanka are public.

Self explanatory! Especially in smaller towns and hotels, cash is king. If you do need to withdraw cash, look for Sampath Bank, Commercial Bank or People’s Bank branches where they are more likely to take international debit or credit cards.

9. Don’t walk around town half naked

Sri Lanka is unlike some other Asian countries in the sense that it is still relatively modest. The primary religion is Buddhism so be mindful of your attire when you visit temples (cover your shoulders and wear pants) or walk around town.

Let me put it this way: shorts and tank tops are fine (it’s not a problem to expose your shoulders unless you’re in a place of worship), but I would not recommend that you drive shirtless on a scooter or walk around town in a bikini. Some tourists are even being stopped by police in the street and told to cover up! Don’t worry, bikinis are fine when you’re actually on the beach.

10. Don’t be disrespectful in religious shrines and monuments

Cover your legs and shoulders, and take off shoes and hats if you are entering a Buddhist temple. Do not mistreat Buddhist images, statues or other artefacts as it is an extremely serious offence – this is one of the most important things not to do in Sri Lanka. Don’t mock the Buddha, and don’t pose for photographs with your back facing the Buddha. Taking a photo with your back facing the Buddha is considered very disrespectful, and is not only frowned upon but you may be stopped by staff or police and asked to delete any photos you took in that position.

You’ll see many signs reminding tourists of this, especially in places like Polonnaruwa, Anuradhapura or Dambulla.

Don’t take photographs of military bases, government buildings or vehicles used by VIPs (this includes numerous sites in Colombo as well as on the east coast in Arugam Bay). Before you take photos of people, especially children, ask! Taking photos of the stilt fishermen? Know that in tourist areas you will be charged a fee for doing so, and that the fishermen are often just there for the photo opp.

12. Don’t hop into a tuk tuk until you’ve agreed on a price

In general, I have found that tuk tuk drivers don’t try to rip you off (too much), and that prices are fairly standard to get from place to place. However, most tuk tuks do not have a meter so make sure you agree on a price (including waiting time, if needed) before you hop in!

Are you a first-time visitor to Sri Lanka? Click here for more Sri Lanka travel tips and destination guides!

13. Don’t underestimate how long it takes to get from place to place

While we’re at it, don’t tell your hotel to expect you at 2 PM when it’s more likely that you’ll arrive at 4 or even 5 PM! Sri Lanka is only about 430 KM tall and 220 KM wide, but it can take you hours and hours to travel from place to place as the roads can be extremely busy.

Expect to wait for a herd of buffalo to cross the road, the occasional monkey appearing out of nowhere, crazy bus drivers and sometimes even a stubborn elephant in the middle of the road. I talk about this a bit more in my post on 12 things you should know before you visit Sri Lanka.

14. Don’t forget to learn a few easy Sinhala phrases before your trip

Sri Lankan people are friendly and open to you trying (butchering) their language! More often than not, Sri Lankan people will chuckle if you pronounce something incorrectly, and teach you how to say it the right way.

Here are some useful Sinhala phrases you should know before you go:

Rainy season in Sri Lanka is like the Bogeyman, there’s really nothing to be scared of. I’m often asked, “when is the best time to visit Sri Lanka?” Sri Lanka is a tropical country so expect lots of blissful sunshine and blue skies practically year-round. If we’re being technical, the island has 2 monsoon seasons: the northeast monsoon (December to March), and the southwest monsoon (June to October); however, you can visit Sri Lanka anytime during the year IMHO!

While there are “rainy seasons”, it is nowhere near as unbearable as rainy season in Laos or Thailand, often it will pour in the evening and the sun will be out the next day. For your reference, the peak season for the southern province is from around November to January (be mentally prepared for significant crowds if you are visiting Sri Lanka in December around Christmas or New Year’s Eve), and the peak season for the east coast is from around June to August. Don’t let people talk you out of visiting Sri Lanka’s south coast in the summer months – you might experience some rain but it tends to be a lot less crowded and there is still plenty of sunshine to be had! More travel tips for Sri lanka’s south coast over here and incredible beaches that you can’t miss in southern Sri Lanka here.

For even more Sri Lanka travel tips and destination guides, head on over here!

Headed to Sri Lanka? I hope you found some of these Sri Lanka travel tips helpful! There are many do’s and don’ts when it comes to traveling around Sri Lanka, let me know in the comments section if there are additional things you’ve noticed during your trip to this beautiful country!

This article contains affiliate links. If you choose to book using these links, I will earn a small commission at no extra cost to you. Thank you for supporting my website by using these links, I only recommend products or services that I have personally used & hotels I have stayed at and loved.

8 Amazing Places to Visit in Andalucia in Southern Spain

Bhutan Travel Guide: Hiking to the Tiger's Nest in Paro